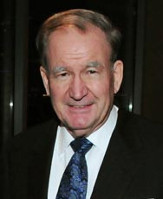 WASHINGTON, D.C. – Ten days ago, President Trump was saying "the United States should withdraw from Syria". "We convinced him it was necessary to stay".

Thus boasted French President Emmanuel Macron Saturday, adding, "We convinced him it was necessary to stay for the long term".

Whatever Trump says, America is not coming out of Syria. We are going deeper in.

Is the U.S. indeed in the Syrian civil war "for the long term"?

If so, who made that fateful decision for this republic?

U.N. Ambassador Nikki Haley confirmed Sunday there would be no drawdown of the 2,000 U.S. troops in Syria, until three objectives were reached. We must fully defeat ISIS, ensure chemical weapons would not again be used by Bashar Assad and maintain the ability to watch Iran.

Translation: Whatever Trump says, America is not coming out of Syria. We are going deeper in. Trump's commitment to extricate us from these bankrupting and blood-soaked Middle East wars and to seek a new rapprochement with Russia is "inoperative".

The War Party that Trump routed in the primaries is capturing and crafting his foreign policy.

"The better U.S. strategy is to ... turn Syria into the Ayatollah's Vietnam. Only when Russia and Iran began to pay a larger price in Syria will they have any incentive to negotiate an end to the war or even contemplate a peace based on dividing the country into ethnic-based enclaves."

Apparently, we are to bleed Syria, Russia, Hezbollah and Iran until they cannot stand the pain and submit to subdividing Syria the way we want.

Suppose they choose to fight to consolidate the victory they have won after seven years of civil war. Where do we find the troops to take back the territory our rebels lost? Or do we just bomb mercilessly?

The British and French say they will back us in future attacks if chemical weapons are used, but they are not plunging into Syria.

Defense Secretary James Mattis called the U.S.-British-French attack a "one-shot" deal. British Foreign Secretary Boris Johnson appears to agree: "The rest of the Syrian war must proceed as it will."

The Journal's op-ed page Monday was turned over to former U.S. ambassador to Syria Ryan Crocker and Brookings Institute senior fellow Michael O'Hanlon: "Next time the U.S. could up the ante, going after military command and control, political leadership, and perhaps even Assad himself. The U.S. could also pledge to take out much of his air force. Targets within Iran should not be off limits."

Can the U.S. also attack Iran and kill the ayatollah without consulting Congress?

[President Trump] is being pushed into becoming a war president to advance the agenda of foreign policy elites who, almost to a man, opposed his election.

Clearly, with the U.S. fighting in six countries, Commander in Chief Trump does not want any new wars, or to widen any existing wars in the Middle East. But he is being pushed into becoming a war president to advance the agenda of foreign policy elites who, almost to a man, opposed his election.

We have a reluctant president being pushed into a war he does not want to fight. This is a formula for a strategic disaster not unlike Vietnam or George W. Bush's war to strip Iraq of nonexistent WMD.

The assumption of the War Party seems to be that if we launch larger and more lethal strikes in Syria, inflicting casualties on Russians, Iranians, Hezbollah and the Syrian army, they will yield to our demands.

But where is the evidence for this?

What reason is there to believe these forces will surrender what they have paid in blood to win? And if they choose to fight and widen the war to the larger Middle East, are we prepared for that?

We have a reluctant president being pushed into a war he does not want to fight. This is a formula for a strategic disaster not unlike Vietnam or George W. Bush's war to strip Iraq of nonexistent WMD.

As for Trump's statement Friday, "No amount of American blood and treasure can produce lasting peace in the Middle East," The Washington Post Sunday dismissed this as "fatalistic" and "misguided."

We have a vital interest, says the Post, in preventing Iran from establishing a "land corridor" across Syria.

Yet consider how Iran acquired this "land corridor."

The Shiites control Iraq because President Bush invaded and overthrew Saddam and his Sunni Baath Party, disbanded his Sunni-led army, and let the Shiite majority take control of the country.

The Shiites are dominant in Lebanon because they rose up and ran out the Israelis, who invaded in 1982 to run out the PLO.

How many American dead will it take to reverse this history?

How long will we have to stay in the Middle East to assure the permanent hegemony of Sunni over Shiite?

Copyright © 2018 by Patrick J. Buchanan and Creators Syndicate, which published the column on April 17, 2018. All rights reserved.


Patrick J. Buchanan is an American paleoconservative, political commentator, author, syndicated columnist, politician and broadcaster. Buchanan was a senior advisor to U.S. Presidents Richard Nixon, Gerald Ford, and Ronald Reagan. His latest book is Nixon's White House Wars: The Battles That Made and Broke a President and Divided America Forever (2017).

Please support the Fitzgerald Griffin Foundation in its mission to promote and preserve the great writing of columnists such as Patrick Buchanan, Joe Sobran and Samuel Francis. Donate online: