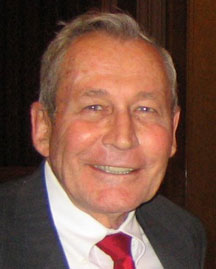 Alexandria, Virginia — It was with great sadness that I learned of the death of Jon Basil Utley. I have known Jon for more than fifty years after becoming a close friend of his mother, the distinguished writer Freda Utley. Jon was a great patriot, holding his adopted country to a high standard. “My country right or wrong,” was not a part of his worldview.

Jon was a great patriot, holding his adopted country to a high standard. “My country right or wrong,” was not a part of his worldview.

To understand Jon’s idealism one must reflect upon the experience of his mother. Freda Utley was born in England. Her idealism led her to be a strong supporter of Communism. She married a Russian Jewish trade official and moved with him to the Soviet Union where Jon was born. When he was two years old, the Soviet Secret Police spirited his father away to a slave labor camp. Jon never saw his father again. Freda left Russia, returned with Jon to England and enlisted friends such as George Bernard Shaw and Bertrand Russell to help in obtaining his release – all to no avail.

Freda understood that communism was not what she imagined and spent the rest of her life fighting it. She was, as Whittaker Chambers wrote of those who became communists for idealistic reasons in the Twenties and Thirties, hit by history as by a freight train.

Freda’s father used to recount a story about his bachelor days. His “laundress,” as the Temple charwomen were called, had come to him one day with a woebegone face and said, “Sir, you have seen my pretty daughter?” “Yes, and a nice attractive girl she is.” “Well, sir, a terrible thing has happened; she has fallen and I don’t know what to do.” After Freda’s father had commiserated with her, she remarked with a Juliet’s nurse smirk: “She would fall again for a trifle, Sir.”

Often Jon was the only voice at conservative gatherings to object to the wars in Iraq and Afghanistan.

Freda pointed out in later years, “I often recalled this story because it seemed apposite to the behavior of many liberal ‘fellow travelers’ of our time. After first falling for the lure of Communist promises of a good time to be had by all and later disillusioned with Uncle Joe Stalin after the war, they are still today all too ready to ‘fall for a trifle’ whenever it suits the Kremlin’s purpose to appear conciliatory.” The list of those in the West who embraced communism is a long one – from Lillian Hellman to Jean-Paul Sartre to Ernest Hemingway and beyond.

Later, Freda and Jon made their way to the United States, first to New York, then to Washington, where Jon attended Georgetown University. Later, he spent years in South America, engaged in business but always observing the political world closely, and serving as an editor of the Times of the Americas.

In 2004, Jon embarked upon a journey to learn his father’s fate. “Return to the Gulag,” tells the story of what Jon discovered.

Upon his return to the U.S., Jon became involved with groups promoting limited government, economic freedom, and a foreign policy free of needless wars. These groups included the Cato Institute, anti-war.com and later The American Conservative, which he served as publisher. Often Jon was the only voice at conservative gatherings to object to the wars in Iraq and Afghanistan. The fact that such wars were embarked upon without a declaration of war by the Congress, as mandated in the Constitution, was particularly disturbing to him.

Jon discovered that in 1938 his father was executed by firing squad for leading a hunger strike at the prison. Josef Stalin himself signed the order for his execution.

I last saw Jon at a dinner honoring him by The American Conservative last year. We sat together and he introduced me to other guests as the person who spoke at his mother’s funeral. At the dinner, The American Conservative editor Kelly Vlahos called Jon “one of the bravest people that I know in Washington.” Ambassador C. Boyden Gray said Jon “was one of the most gentle, one of the most generous men I have ever met.” John Henry said simply that “Jon is America.” Lee Edwards noted that “Jon’s willingness to stand up for the truth as he sees it, regardless of what others say, is his greatest achievement.”

Jon believed in political principles. In his view, free enterprise was inextricably linked to other freedoms. He also opposed the warfare state and what he believed were unnecessary wars entered into in Iraq and elsewhere.

Jon was interested in his father’s Jewish background and shared his mother’s sadness over the growth of Zionism, or Jewish nationalism, which they felt diminished Judaism’s prophetic tradition and its universal moral and ethical values. In 2011, Jon hosted a discussion at the National Press Club of the book Rabbi Outcast: Rabbi Elmer Berger and American Jewish Anti-Zionism by Jack Ross. Jon and I had many discussions about my articles in the quarterly journal Issues of the American Council for Judaism, which I edit. Rabbi Berger was at one time the leader of this group.

Jon was only two years old when his father, Arcadi Bardichevsky, was sent to a Soviet labor camp. In 2004, Jon embarked upon a journey to learn his father’s fate. “Return to the Gulag,” a documentary film funded in part by Boston College and in part by the Freda Utley Foundation, tells the story of what Jon discovered. The film traces Jon’s journey through slave labor camps and cities in northern Russia. The story finally emerged in Vorkuta, within the Arctic Circle. He discovered that in 1938 his father was executed by firing squad for leading a hunger strike at the prison. Josef Stalin himself signed the order for his execution. Jon was able to see pictures of his father and the execution order. In 1961, under the post-Stalin rehabilitation laws, Arcadi Bardichevsky was posthumously rehabilitated. The film has been shown on PBS and at venues around the country. At the time, I remember telling Jon that “Every father needs a son like you.”

Jon had that rare habit in Washington of thinking for himself.

Jon had no sympathy for narrow political partisanship in which Republicans and Democrats feel it necessary to support whatever leaders of their party may say and do. He believed, instead, in political principles. In his view, free enterprise was inextricably linked to other freedoms. The crony capitalism of some Republicans and the socialism of some Democrats had a great deal in common, Jon believed. He also opposed the warfare state and what he believed were unnecessary wars entered into in Iraq and elsewhere. Some of these views made Jon unpopular with party line adherents who tended to support whatever policies “their” party embraced. For Jon, that was too much like the communists he remembered, who were friends of Hitler one day and enemies the next. Jon had that rare habit in Washington of thinking for himself.

Jon Utley’s loss is to our larger American society, for without idealistic, involved and committed citizens like Jon, such a society will not endure.

Jon’s generosity was extraordinary. During college, and for several years after graduation, my son Burke spent time each year working with young people at an orphanage in Guyana. Burke told Jon about the time he spent in Guyana and about the poverty there. Jon immediately made a contribution to the orphanage.

I still remember the night I first met Freda Utley. I was having dinner with the publisher Henry Regnery at the Hay-Adams hotel in Washington in the early 1970s. He asked me if I knew Freda. When I said I did not, after dinner we took a cab to her home. Freda and I became fast friends and soon after this meeting I got to know Jon. We have been good friends ever since. I want to send condolences to his wife Ana and his sons. They should know that the loss is not theirs alone, and not confined to his friends and associates. The loss is to our larger American society, for without idealistic, involved and committed citizens like Jon, such a society will not endure. We were all lucky to have had him with us.

Copyright @ 2022 by Allan C. Brownfeld and the Fitzgerald Griffin Foundation. This article may be reposted or reprinted if credit is given to Mr. Brownfeld and fgfBooks.com.

Allan C. Brownfeld is the author of five books, the latest of which is The Revolution Lobby. He has been a staff aide to a U.S. Vice President, Members of Congress, and the U.S. Senate Internal Subcommittee. He earned a B.A. from the College of William and Mary; a J.D. from the Marshall-Wythe School of Law of the College of William and Mary; and an M.A. in Government and Politics from the University of Maryland.

Help the Fitzgerald Griffin Foundation in its mission to publish the writings of Allan Brownfeld and other great writers. Give a tax-deductible donation to FGF online.