Reviews of Give Speech A Chance:
Heretical Essays on What you Can’t Say or Even Think 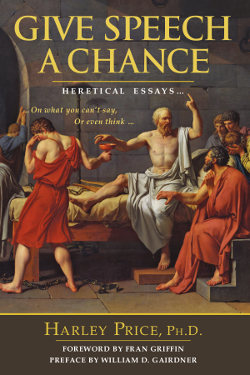 Here’s what some writers and scholars say
about Harley Price’s anthology
Give Speech A Chance (FGF Books, hardcover, June 15, 2022)

Harley Price is a classically educated, erudite man who reacts to our current moral and cultural catastrophes with scorn, sarcasm, and humor -- essential ingredients to maintaining any semblance of sanity today. He writes with flair and is a pleasure to read. Here are two samples from his evisceration of the sexual revolution:  "A Christian is at greater peril today of being hauled before the authorities for calling sodomy a sin than anyone in the Sixties would have been for openly practicing it." and "[the effect of our popular culture] is to keep the populace in a state of semi-arousal, ready at a moment's notice for intercourse as the ancient Spartans were ready for war . . ."  The only problem with Price is that he is in Canada. We need him down here.

-- Robert R. Reilly, the president of the Westminster Institute, is a writer, and a former diplomat and director of Voice of America. He is the author of America on Trial: A Defense of the Founding (2020); Making Gay Okay: How Rationalizing Homosexual Behavior is Changing Everything (2015); Surprised by Beauty: A Listener’s Guide to the Recovery of Modern Music (2016); and The Closing of the Muslim Mind: How Intellectual Suicide Created the Modern Islamist Crisis (2011).

Harley Price exhibits in this volume a rare voice combining eminent learning, moral decency, and common sense. On subjects ranging from the profound lessons of the fire at Notre Dame cathedral to the heavy social costs of "free love," Professor Price offers bracing commentary that enlightens and inspires. Borrowing from Chesterton, he notes the morbid habit of modernity always to sacrifice the normal to the abnormal.

Give Speech a Chance is an antidote to this nihilism, showing instead the true path to ordered liberty and human flourishing.

When asked about the afterlife, Karl Marx once replied that “a good socialist doesn’t ask that question.” Today, forbidden questions abound, and “good Americans” are warned that a lot of answers aren’t allowed either.

Dr. Price breaks all the rules and offers a sober and delightfully readable account of what’s behind the “No Trespassing” signs wielded by our own era's version of Orwell’s Thought Police.

At a time when professional conservatism has become the junior partner of modern liberalism, we have in Harley Price an authentic voice of conservatism. Price inveighs against every intellectually fashionable trend with acuity and wit, delivering devastating blows to the pantheon of social justice and human rights: abortion, sexual promiscuity, transgenderism, atheism, anti-capitalism. These essays are richly rewarding for both the depth of argument and pithiness of his epigrammatic slaying of Leftist shibboleths.

-- Paul Tuns, an author and writer, is the Editor of The Interim, Canada’s Life and Family newspaper. He is the author of The Dauphin: the Truth about Justin Trudeau (2015)

Dr. Price has written a witty, erudite defense of commonsense enlightened by the wisdom of the ancients and the Gospel of Jesus Christ. Channeling Chesterton, he excoriates the fashionable nonsense oppressing the postmodern world. Who wants to turn back the clock? Price answers: Our self-styled “progressives” who know nothing of history, philosophy, natural beauty, or the Incarnation.

-- Brian Patrick Mitchell, Ph.D., is author of Eight Ways to Run the Country (2006) and The Disappearing Deaconess: How the Hierarchical Ordering of Church Offices Doomed the Female Diaconate (2021).

Harley Price’s clarity and courage suffice as excuses to spend “a little more money” on “another book.”  In fact, this is a book you will want to keep around and share with family and friends.  You can sample his stuff on his website, but this is an actual book and they can’t censor those, yet.

-- Roger A. McCaffrey, Editor and Publisher, The Traditionalist magazine

Give Speech a Chance is a most entertaining read. While deadly serious in purpose, it repeatedly provokes an irrepressible smile in the reader. Harley Price fearlessly tackles the most dangerous topics – the COVID-19 panic, same sex marriage, racism, LGBTQ,  abortion, etc., and skewers the pretensions of liberals and leftists with wit and erudition. His insights and arguments are so refreshing that one wishes the essays were longer.

-- Ian Gentles, Ph.D. is an historian and Canadian professor specializing in British and early Christian history. He is the Research Director of the De Veber Institute of Bioethics, for which he has published papers on abortion and euthanasia. Dr. Gentles is the author of four books including Oliver Cromwell, God’s Warrior and the English Revolution (2011), and The English Revolution and the Wars in the Three Kingdoms, 1638-1652 (2007); and a co-author of It’s Not That Simple: Euthanasia and Assisted Suicide Today (2015), Complications: Abortion’s Impact (2011), and Canada’s Founding Debates (1999).

There is no understanding human experience but through the One who became man to show us what fully human means. Christians so captivated by Canadian Jordan Peterson should set aside Jung for Jesus and pick up Canadian Harley Price. Price looks at the whole range of human experience through the only lens worth using—the Incarnation. It is for this very reason his brilliant prose style, delightful wit, and profound learning are put in the service of something much greater than himself: the Truth and bringing his readers to it. Want to make sense of the chaos of our age and to be able to discuss in the only terms that really matter? Read this collection. Bonus: you will have a hell of a good time while you do!

-- Christopher Check is President, Catholic Answers, the largest lay-run apostolate of Catholic apologetics and evangelization in the United States.

It is hard to imagine a more worthy successor to the late Joe Sobran than Toronto medievalist Harley Price, who has dedicated his new book to the late columnist. In Price’s argumentative verve, elegant self-expression, and defenses of Catholic moral teachings, one can discern ample evidence of Sobran’s special talents. Whether he is engaging victimology, atheism, abortion, sex education, conservatives trying to “turn back the clock,” universities, or any one of his many other themes, Dr. Price presents his “heretical” views from the Right trenchantly and in language that I can only envy. It is a dazzling collection of mordant essays on the aberrant Zeitgeist.

-- Paul Gottfried, a philosopher, historian and columnist, is editor-in-chief, Chronicles magazine, and author of 13 books including Antifascism: The Course of a Crusade; and Conservatism in America: Making Sense of the American Right. For many years he was the Horace Raffensperger Professor of Humanities at Elizabethtown College in Elizabethtown, Pennsylvania.

In the aptly titled Give Speech a Chance, Canadian historian and essayist Harley Price notes that there is “an ever-expanding list of things you cannot say in this age of progressive ‘tolerance,’ and it begets the sort of self-censorship that has always been the norm in totalitarian regimes.” To the enormous benefit of any reader who is not ideologically obtuse, Price proves incapable of unwarranted self-censorship, and he courageously pronounces on seemingly the entire list of “unmentionables.” This book is the delightful result.

-- Joseph Baldacchino is editor of Humanitas and senior scholar at the Catholic University of America’s Center for the Study of Statesmanship. He is the author of Economics and the Moral Order and editor of Educating for Virtue.

With the publication of Give Speech A Chance: Heretical Essays on What You Can’t Say or Even Think, Harley Price has demonstrated that Jordan Peterson is not the only talented academic in Canada with the insight and courage to defy the trendy bullies on and off campus who denigrate the truths enshrined in the great works of our Western, Judeo-Christian heritage. While some pedants might question the authority of a medievalist and English professor like Price to make pronouncements on questions of epidemiology and economics, others are bound to decry his penchant for hyperbole. None, though, can refute his central thesis that our society is hovering on the brink of a totalitarian dictatorship where “non-progressive opinion” -- i.e., any criticism of homosexuality, transgenderism, or a woman’s ‘right to choose’ -- is criminalized as ‘hate speech.’”

-- Rory Leishman is a freelance columnist based in London, Ontario. His articles have appeared in The Interim, Lifesitenews.com, and the London Free Press. He is the author of Against Judicial Activism: The Decline of Freedom and Democracy in Canada (2006).

If “dissent is a moral obligation” as Peter Hitchens said, then reading Harley’s book is an obligation fulfilled. You cannot read it and escape unchanged. Dr. Price presents conservatism without apology or compromise. Half-hearted conservatives may even read and second guess their commitment. Progressives will surely squirm and cringe, as Price skewers nonsense on every page.  In “Speech in the Age of Coronavirus Despotism” (chapter 11), Dr. Price dismembers a pandemic of nonsense with sting and wit. It felt like something written by Burke, Gladstone, or Babbitt -- clear, cutting, and meant to destroy the opposition. Everyone needs to read this book. You will learn, you will be challenged, and you will come to see that so much we read today is pure twaddle.

-- Shawn Whatley, M.D., a distinguished Canadian physician, is a Munk Senior Fellow with the Macdonald Laurier Institute, a leading independent medical think tank based in Ottawa, Canada. He is the author of No More Lethal Waits, a guide to reducing wait times and increasing efficiency in hospital emergency departments. He is a former president of the Ontario Medical Association, and a blogger at ShawnWhatley.com.

This stirring book is really Give Reason a Chance. Being a Canadian, the author observes the United States from an objective distance. What does he see? Violent mobs, the mainstream media, and a large portion of government, all in the grips of what the reader can identify as the Seven Capital Sins, especially envy, anger, sloth, greed and lust -- to the point of being psychopathically suicidal.  He shows how the Left’s driving principle is that the end justifies the means, and the end is the obliteration of Western Civilization without knowing what to put in its place. This work equips us to see through the euphemisms of the mainstream media to realize that they are urging us to dismantle all we hold dear. And Harley Price does this in such an entertaining and often humorous way that one wants to keep on reading.

--Rev. Bartholomew de la Torre, O.P. is a Dominican friar currently serving as a missionary in Mexicali, Mexico. He has advanced degrees in Thomistic Philosophy and Thomistic Theology, and a Ph.D. in the History of Medieval Theology and Latin Paleography. For many years he worked at the Leonine Commission transcribing the writings of Thomas Aquinas from early manuscripts. He is the author of Thomas Buckingham and the Contingency of Futures: The Possibility of Human Freedom (1987).

Dr. Price’s essays have the unique quality of combining philosophical depth with cutting-edge wit. While many of the essays address past public policy controversies, they provide valuable insights that help better understand the present.

-- John Carpay, a lawyer, civil liberties activist, and columnist for The Interim, has been an advocate for freedom and the rule of law in constitutional cases across Canada. As the founder and president of the Justice Centre for Constitutional Freedoms, he has devoted his legal career to defending constitutional freedoms through litigation and education.