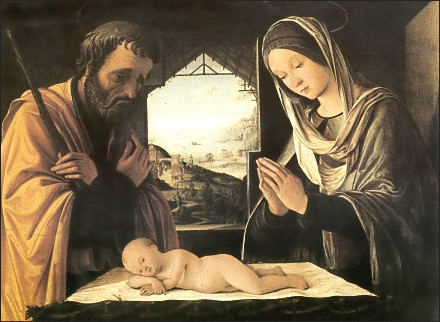 Give Me that Old-Time Unitarianism

The Wanderer, 11/28/1996 – Have you noticed? Our Lord has made the cover of The Atlantic Monthly, in an excerpt from a book by Charlotte Allen. The article concerns the theories of contemporary theologians about the “Q” gospel, the supposed source of the Synoptic Gospels.

The book, I gather, will show how the vain quest for the “historical” Jesus keeps producing a series of stripped-down images of an ahistorical Jesus whose actual teachings conform suspiciously to the political attitudes of modern liberals. The “Jesus Seminar”, for instance, consistently deems inauthentic those Gospel passages that make supernatural and messianic claims.

Mary ... represents total humility and purity, the very opposites of the modern spirit. You can divide people into those she inspires and those she embarrasses.

Such “scholarship” basically does what the deist Jefferson did when he simply edited the Gospels to his own liking. Jesus, it seems, merely wandered around telling people to be nice to each other, and Church authorities later stuck in a lot of nonsense about sin, Hell, redemption, and Resurrection.

The first Christians were evidently Unitarians, who for some reason thought Unitarianism was worth suffering martyrdom for. Mrs. Allen, a solid Catholic and an elegant writer, approaches the skeptics with a subtle skepticism of her own. She lets them do all the talking, until it finally becomes apparent that their ostensibly hardheaded treatment of the Gospels is nothing more than wishful thinking.

The Blessed Virgin Mary shows us His creation at its fullest, its most tender and beautiful and joyful, as if He had saved all His infinite power not to overwhelm us but to make one perfect thing for this poor world.

Meanwhile, Life magazine has done a reverent cover story on the Blessed Virgin — reverent, but of course tactfully noncommittal. She defines the faith as nothing else does: Catholics who have an aversion to speaking of her are nearly always on the way out of the Church, because she represents total humility and purity, the very opposites of the modern spirit. You can divide people into those she inspires and those she embarrasses.

John Henry Newman makes an interesting observation. The Protestant Reformers argued that devotion to Mary detracted from honor to our Lord. But, says Newman, the reverse is true. Wherever Our Lady has been belittled, faith in our Lord — His Virgin Birth, and eventually His divinity — has waned, too. You can’t love her without loving her Son.

In fact I feel a deep pity for those who don’t know what it is to love her, because she lifts our hearts in such a special way. She even changes the way we think of God, because she shows us His creation at its fullest, its most tender and beautiful and joyful, as if He had saved all His infinite power not to overwhelm us (as we men use power, and as we expect it to be used), but to make one perfect thing for this poor world.

I don’t understand how any Christian can deny the special place the faith recognizes as hers. Her image alone is persuasive. What human imagination could have conceived such a thing? And how could the Mother of God be anything less than this?

This article is one of 117 essays in the anthology of Sobran’s columns titled Subtracting Christianity: Essays on American Culture and Society (FGF Books, 2015).

Copyright © 2017 by the Fitzgerald Griffin Foundation. All rights reserved. This column was published originally by The Wanderer newspaper on November 28, 1996.


Help the Fitzgerald Griffin Foundation in its mission to promote and preserve the Joe Sobran legacy. Give a tax-deductible donation to FGF online