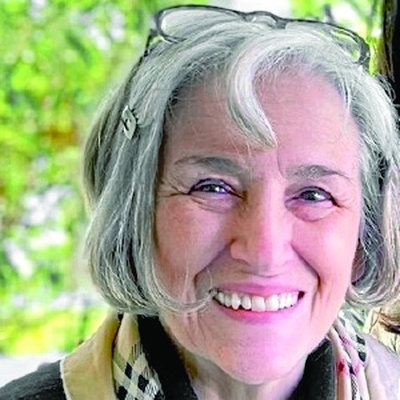 Anne Libby Edwards, cherished wife of Lee Edwards, died on November 6, a week after suffering a stroke. Her demise at this time was unexpected. While she had a few medical issues, she was healthy and spry enough to attend the recent September 3rd wedding of her grandson, Daniel O’Connor in Latrobe, Pennsylvania (near Pittsburgh).

Anne and Lee were happily married for 57 years. In addition to being his steadfast bride and helpmate, Anne was the researcher for his many Lee's books, which included biographies of Ronald Reagan, Barry Goldwater, Ed Meese, Walter Judd, Ed Feulner, and William F. Buckley, in addition to A Brief History of the Modern American Conservative Movement; The Conservative Revolution: The Movement that Remade America; Reading the Right Books: A Guide for the Intelligent Conservative; and The Collapse of Communism, among others.

Anne co-authored You Can Make a Difference with Lee.

As the obit below states, “Anne was known for her sharp wit and original ideas and insights that helped propel movements and even build monuments, including the Victims of Communism Memorial in Washington, D.C.”

Lee Edwards is co-founder of the Victims of Communism Memorial Foundation. Donations in Anne’s name may be made to this educational, research and human rights nonprofit organization devoted to commemorating the more than 100 million victims of Communism around the world – and to pursuing the freedom of those still living under totalitarian regimes.

Blessed with two lovely daughters, Elizabeth and Catherine, and 11 grandchildren, Anne was a devout Catholic and a good friend of many. Prayers for her happy repose and for the consolation of Lee and her daughters and grandchildren would be much appreciated.

--Fran Griffin, a friend of Anne's

Born on August 10, 1939, in Scranton, PA, Anne graduated from Katharine Gibbs Secretarial School, New York City. She became involved in conservative politics in the 1960s and served as president of the Young Women's Republican Club of New York.

Anne married her husband Lee Edwards on May 1, 1965, and assisted him in research for many books and co-authored one with him.

She volunteered at her children's schools and in pro-life activities, and she was a devoted listener and counselor to her friends and family.

Humble and generous with her time and talents, Anne was known for her sharp wit and original ideas and insights that helped propel movements and even build monuments, including the Victims of Communism Memorial in Washington, DC.

Her annual Christmas letter was legendary, her morning coffee and crossword essential, and her love boundless.

She is also survived by her sister Jane (Stevens) Pinnette; and nephew DJ, uncle Martin Brennan, and numerous cousins.

She is predeceased by brothers James, Raymond, and Joseph, her parents Ray Costanzo and Marie (Brennan) Pelikan; stepfather Joseph Stevens, and many other beloved relatives.

Visitation hours with the family will be held at Everly-Wheatley Funeral Home, Alexandria, VA, on Friday, November 11, from 6 to 9 p.m. Mass of Christian Burial will be celebrated at St. Rita Catholic Church, on Saturday, November 12, at 2:30 p.m. Relatives and friends are kindly invited to attend.