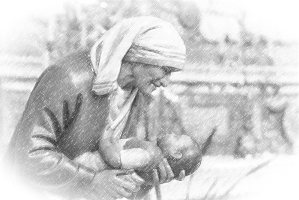 [Publisher’s Note: Mother Teresa of Calcutta was recently declared a saint by the Catholic Church. Her feast day is September 5, the date she went to her eternal reward in 1997. This column was written shortly after her death.]

Subtracting Christianity: Essays on American Culture and Society — I’ve always resisted calling Mother Teresa a saint, not because I had any reason to doubt her holiness, but because I felt it was presumptuous to call any living person a saint. Besides, I suspect that a truly holy person — holiness being inseparable from humility — would hate being venerated in this life.

She found joy in a kind of charity most of us would never dream of attempting, and in an environment we would dread setting foot in.

Now that she is gone, though, it seems safe to say it: if Mother Teresa wasn’t a saint, it’s hard to imagine what one would look like. She not only lived, to all appearances, a holy life; she actually enlarged our conception of what such a life can be. She found joy in a kind of charity most of us would never dream of attempting, and in an environment we would dread setting foot in. Her example drew thousands of others to imitate her.

Donate
Donors of $50 or more will receive a free copy of the book.

Born of Albanian parents in Macedonia, she felt called, as a young nun, to help the extremely poor in Calcutta – chiefly to comfort the dying. Her mission began obscurely; fame came much later, and unexpectedly, when she was near old age and Malcolm Muggeridge heard of her at the time of his own late conversion to Christianity. He did both a book and a TV documentary celebrating her work.

If proof of her sanctity were needed, it came in the form of the Gadarene frenzy of hatred she inspired in some quarters. Without knowing it (she never thought in political terms), Mother Teresa had robbed the Left of its self-endowed credentials as champions of the poor. When it came to the poor, they talked the talk; but the tiny nun walked the walk.

Christopher Hitchens, trying to undo Muggeridge’s work, attacked her in both a book (with an obscene title) and a TV documentary. He also wrote polemics calling her names like “the hellbat.”

The violence of his invective was absurdly disproportionate to the charges he was able to level against her. She had, for instance, taken money from Charles Keating, of the savings and loan scandals, and later pleaded for leniency for him (to Judge Lance Ito, as it happened). Hitchens never adequately explained why this conduct was scandalous at all. Should she have rejected any donation from Keating? Should she have known in advance that he would be indicted? After his conviction (later overturned), why shouldn’t she have sought mercy for him, in light of his generosity to her mission? Did she spend the money on jewelry?

Mother Teresa robbed the Left of its self-endowed credentials as champions of the poor. When it came to the poor, they talked the talk; but the tiny nun walked the walk.

No possible answers to these questions can explain the flapping of vampire wings we hear in the Left’s assaults on her. It’s impossible to imagine a Marxist like Hitchens writing with equal venom of Mao or Castro; he’d see higher motives in their bloodiest purges than in Mother Teresa’s tenderest ministrations. Above all, he’d have no impulse to defile them, as he tries to defile the saint: he’d never use dirty puns when writing about these progressive titans!

I also doubt that he and his leftist friends will feel any impulse, now, to go to Calcutta to fill the vacuum she has left. Their efforts to relieve the poor will continue to take the form of working verbally, far from the slums of the Third World, for “systemic change.” Meanwhile, we can only suppose that thousands of those Mother Teresa cared for in their last hours have welcomed her to heaven.

Copyright @ 2022 by the Fitzgerald Griffin Foundation. “Hating Mother Teresa” was published originally in Sobran's: The Real News of the Month in the October 1997 edition. It is one of the 117 columns in the anthology of Mr. Sobran’s writings: Subtracting Christianity: Essays on American Culture and Society (FGF Books, 2015). You may link to this article at websites and social media.

View a nine-day Novena to St. Teresa of Calcutta.

Joe Sobran (1946-2010), a syndicated columnist for 35 years, was a CBS Spectrum commentator, an author, and sought-after lecturer. Considered to be one of the greatest essayists of the 20th century, Sobran is often compared to G.K. Chesterton and H.L. Mencken.

Donate
Or mail your tax-deductible donation to: Fitzgerald Griffin Foundation
344 Maple Avenue West, #281
Vienna, VA 22180
Or call us toll-free at 1-877-726-0058
Donors of $50 or more will receive a complimentary copy of Subtracting Christianity.

Thank you for your support of Joe Sobran’s legacy!