“In this world you will have affliction. But take courage,
I have overcome the world.” – John 16:33 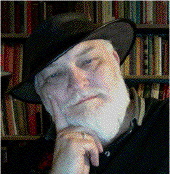 fgfBooks.com, November 11, 2021 — Ronald N. Neff, a close ally of Joe Sobran’s, the managing editor of Sobran’s newsletter, long-time editor for the publications of the Fitzgerald Griffin Foundation – and my friend – died on September 26. An obit written by his loyal wife of 40 years, Susan Neff, can he read here.

“Ronn,” as his friends called him, had a brilliant mind and a superb command of the language which he used to help writers and authors, including Joe Sobran and most recently Harley Price, make their work error-free and elegant. He did not just proofread or copy edit. He would thoroughly go over his client’s work, checking the most minute details for accuracy.

We worked together for 13 years when Griffin Communications was publishing the monthly newsletter, Sobran’s: The Real News of the Month (1994-2007). Joe Sobran rarely, if ever, needed help with syntax or grammar. But because the brilliant Sobran would sometimes quote passages from memory Ronn was there to ensure their accuracy. It is a testament not only to Joe but also to Ronn that the monthly Sobran’s newsletter was such an exquisite journal.

Ronn was not just Sobran’s editor. Principally he was Joe’s steadfast friend. Sobran wanted Ronn to be involved with his newsletter not only because of his outstanding skills, but because of their comradery and similar intellectual interests and pursuits. Because Ronn was intellectually on par with Joe, these two good friends were able to happily converse for hours on wide-ranging topics.

Typical of Ronn, he went above and beyond the call of duty in helping his friend Joe in any way he could. He also did the same for me over the years. Ronn was an early Mac proponent. He brought both Joe and me into the Macintosh world, as our mentor and fix-it man, instructing and helping us over the years with our Mac computers and laptops.

Ronn’s command of the English language and knowledge of classic works, grammar, and syntax was unsurpassed. His last project for the Fitzgerald Griffin Foundation was to review and proofread the manuscript of Give Speech A Chance by medievalist author Harley Price. Ronn spent many hours on this project. While he found very few errors, he did discover a quotation that he believed was inaccurate. The passage had been transcribed from the Internet. Ronn ordered a book that has the original quotation — and sure enough, Ronn was right: the citation on the Internet was incorrect. This was typical of Ronn’s thorough work.

As Jacob Hornberger noted in his obit, Ronn had “a wide breadth of knowledge in history, philosophy, religion, and many other subjects.” This is an understatement. I wish I had taken notes on the countless times he gave me an insight to a doctrinal issue or explained an historical fact that I was unaware of.

The first time I was at the Neff household, Ronn proudly showed me their library. He and Sue had converted a bedroom into a library, not just with book shelves along the walls, but with actual library stacks in the middle of the room! His love of books, covering a wide range of subjects and topics, never ceased to amaze me. Earlier this year he inquired if I would like to have his set of Thomas Aquinas’s Summa Theologica -- not in English but in Latin. As his good friends know, Ronn enjoyed reading the Summa in Latin.

But Ronn was not entirely a bookworm. Proud of his Midwestern roots (he grew up in Indiana), Ronn was an affable and delightful dinner companion, and an accomplished speaker. He was an eloquent spokesman for FGF Books at the 2016 Fitzgerald Griffin Foundation’s press briefing on the republishing of Joe Sobran’s Hustler: The Clinton Legacy at the National Press Club in Washington, D.C. Here is his last videotaped speech at YouTube.

Ronn was a devout Catholic. He believed in the frequent reception of the sacrament of Penance, and staying in the state of grace. He joyfully welcomed a Catholic bishop and at least four Catholic priests who came to minister to him over his four-and-a half month struggle to recuperate.

He was so well schooled in Christian controversies that he was able to unravel for Protestant preacher Scott Hahn a major roadblock which had been preventing him from becoming a Catholic. It was because of Ronn’s solving Dr. Hahn’s last problem with Catholicism that he knew that he had to become a Catholic -- and did. Dr. Scott Hahn is now considered a major Catholic apologist, due, in great part, to Ronn’s influence on him.

Fast forward to Ronn’s lengthy hospitalization this year: Ronn valiantly fought lung and kidney problems, complicated by lingering long-haul Covid symptoms from mid-May until his death. Because of tyrannical pandemic restrictions, I was not able to see him as much as I wanted to (in fact a guard was once summoned to throw me out of a hospital in D.C. when I tried to sneak into his room). But the times I was able to be with him are memorable.

The first time I visited, Ronn asked if I had a Rosary with me, which I did and gladly gave to him. He had a tender devotion to Our Lady and the Rosary, and always carried his Rosary beads with him. His great aunt was a mother superior of the Little Sisters of the Poor. Ronn was buried with her Rosary. Sue, who spent many hours every day with Ronn during his illness, frequently prayed the Rosary with him.

A few weeks ago, knowing that I was coming to visit, he greeted me with words he had written on his legal pad (as he had difficulty speaking through the trach): “Status of Harley book?” I updated him, told Sue to kiss him (he nodded in full agreement with that), and then I held his hand for a moment. He indicated that he wanted me to kiss him. I responded, “I didn’t even know that you liked me!” He got a big chuckle out of that.

The last time I was with him, when it was apparent that his time on this earthly realm was coming to a close, I read the entire Gospel of John to him, with my left hand resting on his arm while Sue was holding his other hand. While he was weak and unable to gesture to us, I could tell that he was aware and listening. That day, Sue, Bill Burrow, and I prayed all the mysteries of the Holy Rosary, and the Divine Mercy Chaplet, a wonderful prayer that invokes Our Lord. We prayed the 50 prayers of the chaplet in this way: “For the sake of His sorrowful passion, have mercy on Ronn and on the whole world.”

I met Ronn about 30 years ago. In our discussions on spiritual matters, he made it clear that this world is simply a temporary dwelling, and that one’s focus needs to be on the next life. He spent much of his adult life preparing to meet his Maker. In the last three months of his life, he also had the extraordinary gift of receiving the Last Rites of the Catholic Church from a bishop and several priests. Ronn’s funeral Liturgy at Epiphany of Our Lord Byzantine Church was stunningly beautiful and hopeful as well. Ronn is no longer with us in this world, but we will see him again in the next life.

As Jesus said to Martha, “I am the resurrection and the life; he who believes in Me, even if he die, shall live; and whoever lives and believes in Me, shall never die.” -- John 11:25

Eternal rest grant unto Ronn, O Lord, May perpetual light shine upon him. May he rest in peace. Amen.

P.S. Ronn: I wish you could have edited this for me.

Copyright @ 2022 by the Fitzgerald Griffin Foundation and Fran Griffin.

You may link to this column at your website and social media.

Make a donation in Ronn Neff’s memory to the Fitzgerald Griffin Foundation here.