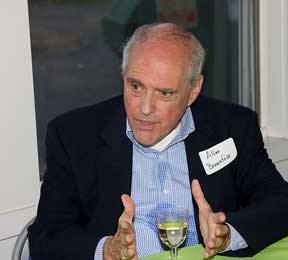 Links to some of Allan C. Brownfeld articles:

Are There Any Limits on Bad Behavior? at:
campusreportonline.net
Right Side News

The recipient of a Wall Street Journal Foundation Award, Mr. Brownfeld has written for such newspapers as THE HOUSTON PRESS, THE RICHMOND TIMES DISPATCH, THE WASHINGTON EVENING STAR and THE CINCINNATI ENQUIRER. For many years he wrote three columns a week for such newspapers as THE PHOENIX GAZETTE, THE MANCHESTER UNION LEADER, and THE ORANGE COUNTY REGISTER. His weekly column appeared for more than a decade in ROLL CALL, the newspaper of Capitol Hill. His articles have appeared in such journals as THE YALE REVIEW, THE TEXAS QUARTERLY, THE NORTH AMERICAN REVIEW, ORBIS and MODERN AGE.

Mr. Brownfeld served as a member of the staff of the U.S. Senate Internal Security Subcommittee and was the author of that committee's 250-page study of the New Left. He has also served as Assistant to the Research Director of the House Republican Conference and as a consultant to such members of Congress as Reps. Phil Crane (R-Il) and Jack Kemp (R-NY) and to the Vice President of the United States.

He is a former editor of THE NEW GUARD and PRIVATE PRACTICE, the journal of the Congress of County Medical Societies and has served as a Contributing Editor AMERICA'S FUTURE and HUMAN EVENTS. He served as Washington correspondent for the London-based publications, JANE'S ISLAMIC AFFAIRS ANALYST and JANE'S TERRORISM REPORT. His articles regularly appear in newspapers and magazines in England, South Africa, Sweden, the Netherlands and other countries.

Mr. Brownfeld has been the recipient of five George Washington Honor Medals from Freedoms Foundation in Valley Forge, Pennsylvania, where he was a regular lecturer for many years. He has also been a regular lecturer at the U.S. Air Force Special Operations School in Eglin, Florida, and for the Close-Up program for high school students in Washington, D.C.

In l980, he served as a member of President Ronald Reagan's transition team at the Equal Employment Opportunity Commission and wrote that group's report of policy recommendations.

The Conservative Curmudgeon is copyright @ 2021 by the Fitzgerald Griffin Foundation, www.fgfBooks.com. All rights reserved.

Archives of The Conservative Curmudgeon:

• November 30, 2015 – Income Inequality: An Emerging Issue Once Addressed By The Founding Fathers

• November 19, 2015 – Conservatives Have Forgotten What They Want To Conserve

• August 20, 2015 – Unscripted and Unprogrammed: The Strange Appeal of Donald Trump

• April 17, 2015 – What Hillary Clinton's Attempt To Re-create Herself Tells Us About American Politics

• October 17, 2014 – One Congressional Achievement: Legalizing What Used To Be Viewed As Corruption

• October 8, 2014 – Heading Toward a War in the Mideast That We Can Ill Afford: Without An Apparent Strategy or Congressional Authorization

• August 18, 2014 – Tragic Incident in Missouri Does Not Demonstrate That America is a “Racist” Society

• July 3, 2014 – The Continuing Growth of Executive Power Is a Threat to Representative Government

• November 14, 2013 – Christianity Is Under Attack in the Middle East — and Few in the West Seem To Care

• September 20, 2013 – When Government Lies to the People, the Fabric of Representative Democracy Itself Is the Victim

• September 3, 2013 – The State of Race Relations 50 Years After the March on Washington

• July 30, 2013 – The Death of Trayvon Martin Has Unleashed  A Wave of Demogoguery That Must Be Answered

• January 15, 2013 – The Neo-Conservative Assault on Chuck Hagel:  The Politics of Character Assassination

• January 5, 2013 – Reconsidering the Massive U.S. Aid to Israel: Has it become an impediment to peace?

• December 3, 2012 – A Look at Late 20th Century America from a Perceptive and Talented Observer

• November 14, 2012 – Thanksgiving: A Time to Reflect on America’s Uniqueness

• October 30, 2012 – The 50th Anniversary of the Integrating of Ole Miss:  A Landmark Toward Improved Race Relations

• September 25, 2012 – What Does an Epidemic of Cheating Tell Us about American Society?

• September 14, 2012 – Freedom of Choice in Education Should Be a Key Issue in the Presidential Campaign

• September 7, 2012 – Americans Do Not Want or Need a Pre-Emptive War against Iran

• August 13, 2012 – Can a Free Society Endure if the Values Needed to Sustain it Are Not Transmitted?

• August 10, 2012 – Presidential Campaign Needs To Be About What’s Best for America, Not Race

• August 2, 2012 – Honor and Integrity, Once Valued and Transmitted, Are Increasingly Rare Today

• July 19, 2012 – The Strange Campaign to Secure the Release of Convicted Spy, Jonathan Pollard

• June 12, 2012 – Democrats and Republicans are Co-Conspirators in Back Room Deals and Government Cronyism

• December 15, 2009 – Examining the Real Causes of Gang Violence in Chicago and Other Cities

• September 9, 2009 – Rep. Jefferson’s Freezer: Only the Tip of the Iceberg of Congressional Corruption

• August 18, 2009 – What Will Rationed Health Care Mean for Elderly and Disabled Persons?

• August 10, 2009 – Celebrating a Black Conservative Who Has Always Put Country above Color

• August 4, 2009 – Atheists Misread the Role of Religion in American Society

• May 5, 2009 – Reflections on Visiting a U.S. Military Cemetery Abroad:  The Uniqueness of America and the Dangers of Going to War Precipitously

• March 3, 2009 – Democracy and Labor Unions: A Challenge to President Obama’s Commitment to Change

• January 8, 2009 – Pay-for-Play in Illinois and Business as Usual in Washington:  How Different Are They?

• December 17, 2008 – In Search of a Principle to Justify Massive Bailouts

• November 4, 2008 – Economic Crisis Shows Capitalism Not An End in Itself

• September 25, 2008 – Murdered by Mumia: The Elite’s Crusade on Behalf of a Convicted Cop-Killer

• August 26, 2008 –What Would the Founding Fathers Think About the Explosive Growth of Government Power?

• July 2, 2008 –The Great Terror at 40: Remembering the Elites' Enchantment with Communism

• May 29, 2008 – Congressional Ethics and Big Government:  As One Grows, The Other Declines

• May 15, 2008 – An Examination of the Long Tradition of Conservative Thought in the Black Community

• May 9, 2008 – Lobbyists: An Increasingly Influential Fourth Branch of Government